All My Stuff on a Truck 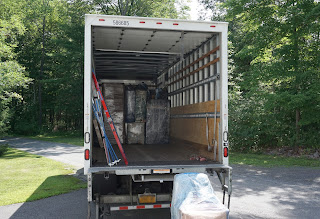 We moved recently, and were able to enjoy what some experts list as one of life's top most stressful experiences. It wasn't so bad, really. We've done it before, and we'll do it again. When I see moving listed as a top stressor, it doesn't explain exactly what the stressful part is supposed to be. So I gave it some thought.

I came up with the fact that in a short period of time, you have to touch and process every single item you own. Nothing can be left out. Nothing. For most other tasks, there's some wiggle room where you can do most everything, leave a little undone, and say "Good enough! Let's stop here and call it good. Pizza anyone?"

But you can't do that when you're moving. When you stop, there's always something that's still unpacked staring at you as if to say "What about me? Am I going too? I bet you don't have a box big enough for me, do you? What were you thinking when you bought me? Why are you yelling at me?"

Then there's the part when your stuff - all your stuff that you've had to look at, wrap, and pack -  gets loaded on the truck. All your stuff on a truck. One truck. All of it. If you're high class then maybe it's two or more trucks. But in that case you have people to pack your stuff, and this blog doesn't apply to you. Stop reading, but continue if you want to learn what it's like for the rest of us. You'll see two trucks in our video, but we're not high class. The second truck moves the movers and their stuff. Everybody's got stuff.


What could happen to all your stuff as it takes a ride on the truck? Think of the possibilities! It could flip over, burst into flames, and make the evening news. The reporter will say how quickly your box of Snuggies and Slankets caught fire and blocked traffic for 3 hours. The camera will zoom in on the fast-lane bonfire, everything engulfed in flames except the label with your name and new address.

What if it travels through some civil unrest and gets looted? Will you be mad if an angry mob hauls off with all your stuff? How would you feel if they don't want your stuff and empty it all onto the curb so they can just take the truck? "Hey! I got good stuff, no!?"

Worse yet... what if it arrives safely at your new home, piled high like a box mountain in the middle of the floor where you're supposed to live? And you have to unpack, unwrap, and find a place for every last little stinking thing that you've accumulated and feel you can't part with, though you know you probably should!?

Let's not hope for civil unrest, or traffic accidents, but when you're unpacking from a move, be honest... it's tempting.

Jam on the Hill 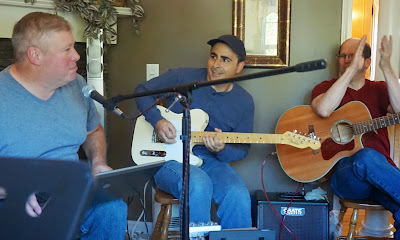 Like most everybody, I have some really good friends... the kind that stick with you when you go through stuff, and that you stick with when it's their turn. If you go away for a long time, they're still there when you come back, as if no time had passed.

When we're young we'll often find new friends when passing time with others doing silly things that we enjoy in common. The best of those friends from the "good old days" will schedule time to get together just to do the same silly things again and again. They'll travel long distances, bring their families, and invite a bunch more to join the fun.

We used to do this once in a while on a Sunday evening when we all lived close by. Back then it would just sort of happen if one of us suggested it. Now that we're spread a bit more across the map, it takes some planning just to make it an annual event. We skip a year sometimes, but as it is with true friends, it never feels like any time had passed at all.
Posted by fivenote at 1:24 PM No comments: 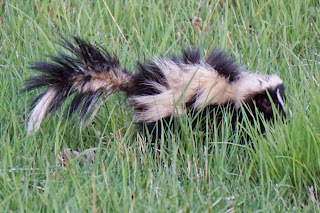 Everyone went home for a good night's rest, smelling their best.
Posted by fivenote at 4:07 PM No comments: